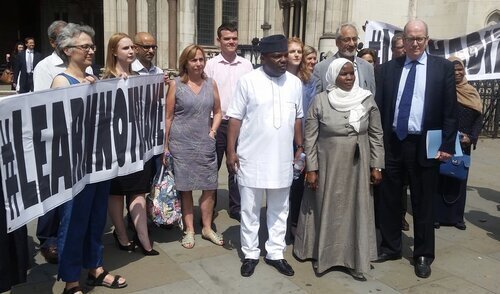 Learn Not Blame is DAUK’s central campaign launched in Parliament on 20th November 2018. We aim to empower individual doctors to be part of a transformational change process working towards a revolution in the culture of the NHS.

For too long, when things go wrong, the blame culture has prevailed. This is endemic both within the profession and NHS organisations more widely, often without genuine analysis of systemic failings, or learning from what happened. Recent high profile cases have illustrated just how toxic this blame culture can be. In this campaign, we are coming together to say: enough. This has to stop.

What we need is a just culture in the NHS, where every individual – whether patient or staff – is valued and cared for. We need to develop a culture that celebrates success and the good work of thousands of professionals, but one that also acknowledges and learns in a constructive and fair manner when things go wrong.

Through the ‘Learn Not Blame’ campaign, we are committed to creating a better culture that promotes learning from adverse events and prioritises fairness, openness and the wellbeing of both patients and health care professionals. This can only happen by the creation of a just culture for all. We seek to empower doctors – and all those working in the NHS regardless of role – to do what they can within their own sphere of influence to ensure meaningful change and to create a better NHS to work in – and a better NHS for patients.

Learn Not Blame in the news

The Doctors’ Association UK (DAUK), along with Dr Anil Jain (Consultant Radiologist ) have successfully lobbied the Medical Defence Union to agree to fund an

DAUK in BMJ News: “Bawa-Garba is free to practise again without restrictions after tribunal ruling”

Hadiza Bawa-Garba has been allowed to practise again without restrictions, 10 years after a 6 year old boy in her care died of septic shock

The Doctors’ Association have launched their new campaign: Learn, Not Blame. In the wake of the case of Dr Hadiza Bawa-Garba the DAUK feel the medical profession has a unique opportunity to radically reform the way medical error is approached in the UK. Currently the culture in the NHS is one of fear and blame, and the DAUK feel strongly that this must be reformed to one of openness and learning. DAUK will be submitting it’s own evidence to the Williams review on gross negligence manslaughter in the first instance. However, Learn, Not Blame has a wider remit in highlighting the impact of systemic failures endemic in the NHS on patient safety and in campaigning for move from a blame culture to a just culture. As part of the campaign DAUK will be speaking out on staffing ratios, physician fatigue and poor rota design, IT failures amongst other safey issues.

You can read about the DAUK’s submission to the Williams review below:

Currently, the culture in the NHS is one of fear and blame, and not one of openness and learning. Doctors are afraid to admit to their errors and near misses, with the fear that unilateral and disproportionate action may be taken by the GMC, and now that they may be subject to criminal proceedings for simply making an honest mistake. Whistleblowers are actively discouraged from speaking up. Investigations within the NHS are notoriously opaque and lengthy for relatives, and the culture of pinning the blame on one healthcare professional leads to the loss of crucial opportunities to learn from the systemic failures that always surround medical error.

In Learn, Not Blame DAUK call for radical reform of the way medical error is approached in the UK. The DAUK feels strongly that there should be widespread use of an independent investigative body, similar to the Air Accidents Investigation Branch, or markedly increased use of the HSIB, with findings being disseminated nationwide, so the NHS can learn from mistakes and near misses as a whole.

It is crucial that an environment of psychological safety exists in the NHS, and that doctors feel able to speak up, reflect and learn from their mistakes. The medical profession have found themselves in the unprecedented situation where doctors now feel too wary to reflect on paper after a reflective document of Dr Hadiza Bawa-Garba’s was fed into her criminal trial and used against her in court. Doctors urgently need a safe space to debrief and reflect.

Doctors that wilfully harm should be punished to the full extent of the law. Thankfully this is incredibly rare. The DAUK feel that the use of gross negligence manslaughter in cases where a doctor has simply been trying their best to save a life under immense pressure is grossly inappropriate and disproportionate. In a system stretched to breaking point, doctors are increasingly finding themselves doing the jobs of several doctors at once, and many are concerned that working under this pressure, mistakes are inevitable. Yet currently, working in a failing system appears to be no mitigation when an error is made.

Following Dr Hadiza Bawa-Garba’s conviction the GMC’s tribunal panel, the MPTS explored the multiple systemic failures that surrounded her case, and did not recommend she be erased from the medical register, citing numerous mitigating factors. The GMC subsequently appealed this decision and took Dr Bawa-Garba to court to have her struck off. This action, and the apparent unwillingness of the GMC to acknowledge and address the system failures of the case,  prompted widespread anger within the medical profession. The GMC have recently responded to a Department of Health consultation on regulation and are now seeking the power of “automatic erasure”, wishing to bypass their own tribunal altogether. We feel strongly that a professional tribunal is best placed to unpick complex medical decisions and to judge professional competence in the context of widespread system failures.

The DAUK will be submitting our own evidence to the Williams review with the following proposals:

-the creation of an independent investigative body, or increased use of the HSIB, whose first priority will be to explore the systemic failures that ultimately surround medical error.

-the repeal of the recent amendment to Section 35 1A of the the Medical Act 1983 that currently allows the GMC to compel doctors and organisations to disclose written reflections for Fitness to Practise hearings.

-the repeal of Section 40A of the Medical Act that allows the GMC to appeal MPTS verdicts.

-assurance from the Department of Health that Parliament will not grant the GMC the power of automatic erasure.

-a higher bar for the CPS to consider pursuing a prosecution for gross negligence manslaughter.

-that the law on gross negligence manslaughter be urgently reformed, the legal test of GNM to include actions being “wilful or reckless”, and that system failures be taken into account as mitigation in both criminal proceedings and Fitness to Practise Hearings.

The DAUK will be lobbying the BMA and the Royal Colleges to achieve this, as well as working alongside the MPS. The DAUK will also be launching their public campaign, My Honest Mistake in coming weeks.