The Doctors’ Association UK (DAUK) is greatly concerned with the continued prolonged delays in the processing of visas for internationally medical graduate (IMG) doctors. These doctors have been offered jobs in the NHS and are unable to take up these jobs due to extended and unacceptable delays in red tape, resulting in short-staffed departments when the NHS is hurtling towards one of the worst winter crises in its history.

We wrote to the Home Secretary calling for these visas to be processed without delay, and for the Government to advise NHS trusts to allow all doctors who have applied for their visa to start work.

DAUK have heard from NHS doctors working in the UK on non-permanent visas that they are facing three-to-four month waits for these documents, which significantly impacts their lives and ability to start working for the health service. In July 2022, the Home Office announced that healthcare workers could work without a visa outcome provided they had a valid Certificate of Sponsorship (CoS), or evidence that their new visa application had been submitted. This privilege to work without visa outcomes expired on 4th of October 2022.

Revoking this privilege to work without a visa outcome is hugely detrimental to the current NHS staffing crisis. Winters are historically the worst time for the NHS and right now, as we deal with the aftermath of Covid-19, we need to do all we can to retain staff. Figures from NHS digital show that over 20,000 doctors left the NHS between April 2021-22. The BMA warned last month that the NHS is “in danger of complete collapse” due to forty percent of consultants planning to leave the NHS in the next year due to the pensions crisis.

Dr Hagar Shahin is a junior doctor and IMG working in the South East of England. His biometric residence permit (BRP) expires on 14th January 2023 and he has been unable to apply for a visa extension as he is still waiting for his COS (certificate of sponsorship). “The visa process is taking so long, often more than 8 weeks and I am worried that I may not have a new visa by 14th January, meaning I will have to stop working for the NHS. I do not think it is in the best interests of patients to do this to IMG doctors.”

Another IMG doctor working in the Midlands, who wished to remain anonymous, spoke of their visa delays: “I applied mid-August and am still waiting for a decision. My trust has not allowed me to work since early September, meaning I have been struggling without a job since then. I tried to contact the Home Office but had no luck.”

“We have a cohort of doctors who actively want to stay and work within our health service, who cannot due to bureaucracy and are now struggling to make ends meet. This needs to be remedied without delay and we call on the Government to advise NHS trusts that doctors who have applied for their visas are allowed to start work, as was the case before the 4th of October 2022.”

“Historically, winters have been a difficult period for the NHS and this winter is likely to be one of the worst given that we are also dealing with the aftermath of Covid-19. At a time when millions are on waiting lists to be seen, the NHS needs all the help it can get. All IMGs who have applied for a visa, or who have a valid CoS, should be allowed to work irrespective of when they get their visa decision. We need to prioritise our patients and reduce their suffering by serving them – keeping onshore IMGs away from hospitals is counterproductive. Delays in visa decisions are keeping qualified doctors away from the patients that need them the most.”

“It is nonsensical to prevent these highly qualified and motivated doctors from working in the NHS. We want to be attracting doctors, not pushing them away in a time of dire need. Ultimately, patients will bear the brunt of this decision.”

Read our full letter to the Home Secretary here: 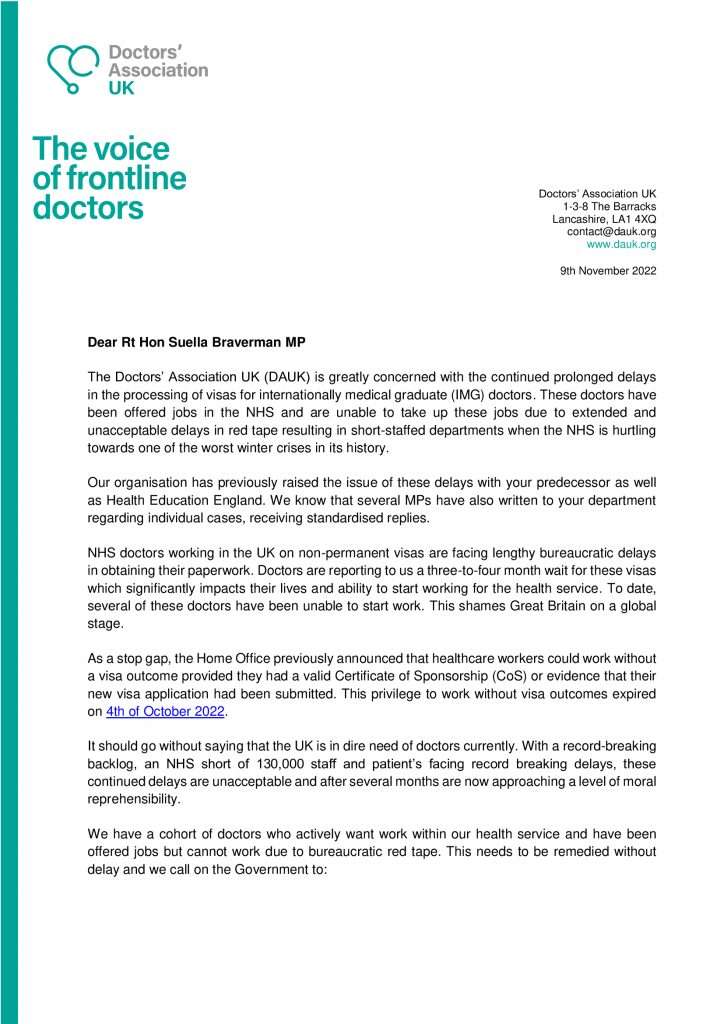 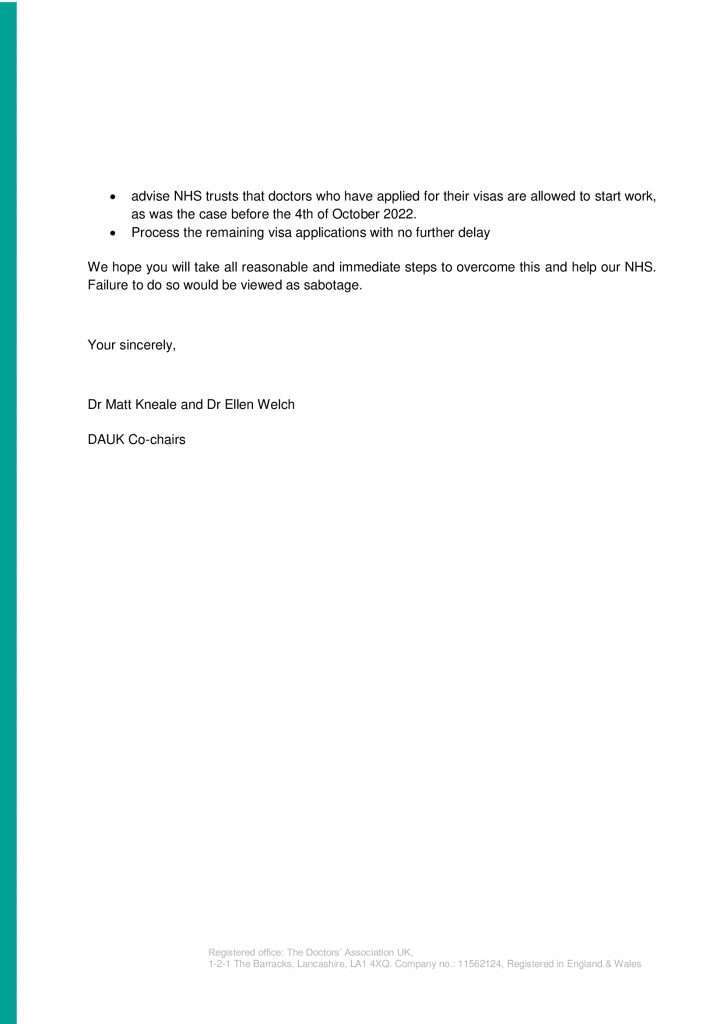